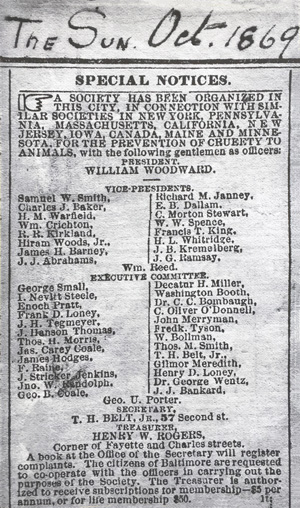 Concerned about the plight of work horses on city streets, 50 prominent Baltimoreans, including our first Board president, William Woodward, Esq., founded The Maryland Society for the Prevention of Cruelty to Animals of Baltimore City.

Its mission is to enforce laws for the protection of animals and to promote education about proper care of animals.

We are one of the oldest animal welfare organizations in the country.

The Maryland SPCA is incorporated.

SPCA agents patrol the streets looking for violators of animal cruelty laws and work with police to make arrests. Horses benefit the most, with agents helping to prevent beatings, pain from poorly fitting harnesses, harm from overloaded wagons, and a lack of feed and water. 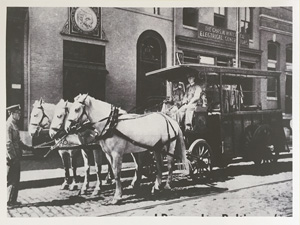 Operation of a horse-driven ambulance wagon for horses begins.

Mary Shearer, our 8th president, writes, “There were two seasons when trouble came particularly heavily… during the extremely hot latter part of the summer, when teams driven by inconsiderate owners would literally work themselves to death… and during the early part of the year when icy streets offered very little traction for work horses.” Our ambulance horses wear chain-like attachments on their feet for traction. The Society loans several hundred sets to teamsters who couldn’t afford them. 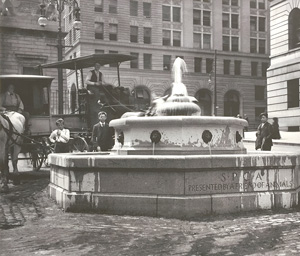 The Society begins placing drinking fountains for thirsty horses in prominent city thoroughfares. A dedicated Society member donates a fountain that is placed at Monument Square on Calvert Street, next to the monument commemorating the Battle of Baltimore in the War of 1812.

612 North Calvert Street is leased as our first Society headquarters and is purchased in 1907. The front part of the building holds offices and a boardroom, while the rear houses a huge stable. The ground floor has stalls for several horses, space for the ambulance and a harness room. The upper stories house a crew member who is on duty around the clock. This location is our business address until 1926, and is an animal receiving station until 1967. This site is now part of the Waterloo Place apartments. 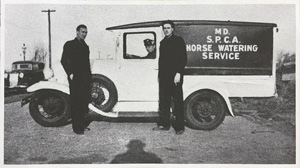 Beginning in 1924, a horse-watering truck, funded by Nellie C. Williams, appears on city streets. The truck visits areas where watering fountains are not available, such as wharfs and railroad terminals. During a 29-day period in 1940, the water truck covers 503 miles, delivering 11,000 gallons of water to 1,457 horses and mules. 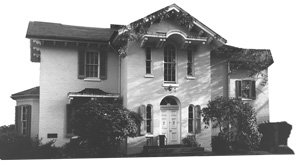 Hampden residents oppose having a dog shelter in the neighborhood. The city council and mayor enact a bill in 1928 to take Evergreen on the Falls from the Maryland SPCA. We prevail and install six dog kennels in 1930. 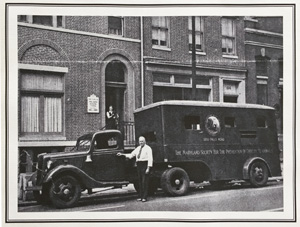 Our motorized ambulance for large animals replaces our horse-driven ambulance and rescues injured animals from the streets. It is pictured in front of our offices at 612 North Calvert Street. 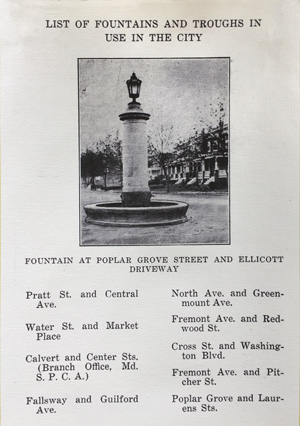 In 1941, there are nine horse-watering fountains in the city furnished by the SPCA, including one at the intersection of Calvert and Centre Streets, our office location.

In 1948, we open our quarters for cats—complete with cat exercise runs and a special post for claw sharpening—and celebrate with a Society circus, featuring performing dogs, cats, monkeys and goats. Private boarding space is available for 47 dogs and 12 cats.

The city requires that we provide lost and stray dogs to local hospitals for medical research, an act referred to as “pound seizure.” This incites internal and public controversy, and we conclude that pound seizure violates our charter to prevent cruelty to animals. So after more than 50 years, we choose to discontinue our contract with Baltimore City to manage shelter facilities and collect stray and lost animals. From 1950 to present, the Maryland SPCA has received no funds from the local or federal governments, relying instead on private donations to care for animals.

We create and fill the position of superintendent and humane officer and phase out the system of street agents who report abuse to police. But we continue to investigate allegations of animal cruelty into the 1990s. 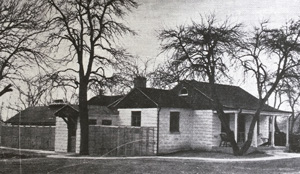 We transfer all operations from 612 North Calvert Street to 3300 Falls Road. The kennel at Evergreen is now a shelter for stray and unwanted pets because the Baltimore citizens prefer to bring animals to the Maryland SPCA rather than surrender them to the city.

In 1973, Mayor William Donald Schaefer designates October 1-7 “SPCA Week” as part of the fundraising campaign for our new facility. Two years and $300,000 later, the facility opens.
In 1975, we begin spaying and neutering all of our unfixed cats on site. We are a model facility in trying to stem pet overpopulation, and as early as 1973, our president calls for an increase in educational efforts about the impact of animal overpopulation.

In 1975 the Maryland SPCA opens what the Baltimore Sun calls the “state’s most modern kennel facility.” 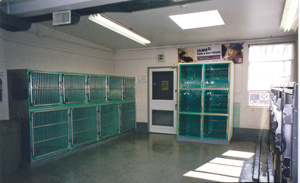 We open a nursery for puppies and kittens that separates them from adult animals, cutting down on the noise and commotion that disturbs the youngsters.

We begin to spay and neuter all unfixed, adoptable animals on site. In 1988, we begin spaying and neutering kittens and puppies at eight weeks of age. 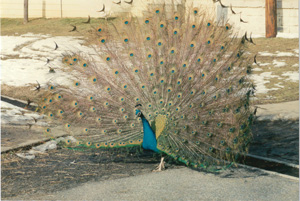 Our urban “barnyard” stops accepting animals other than dogs and cats because of cost and space constraints. The kinds of animals varied over the years, but our 1975 residents included ponies, goats, chickens and one white piglet. In later years, barnyard residents included burros, peacocks, pot-bellied pigs and geese. 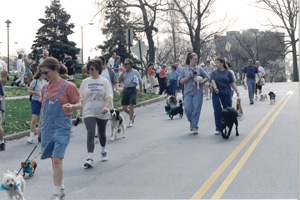 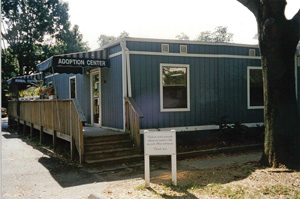 We renovate and expand our adoption center with funds from a bequest of over $1 million from Jeanette Snyder. We add new office space, create areas for people to get acquainted with animals, install sound-proof panels and separate cats from dogs by adding a room for cats.

Over a four-year period beginning in 2000, we spay and neuter more than 10,000 animals in our mobile clinic, the Neuter Scooter. The scooter is funded in part by the Animal Welfare League, a few large donations, small fees for vaccinations and thousands of small donations from pet owners. The Neuter Scooter is retired in 2005.

We join the Humane Society of the United States and other area shelters in successfully advocating for state legislation to make aggravated cruelty to animals a felony.

We begin to recruit volunteers to temporarily care for puppies and kittens who are too young for the shelter. In 2002, our Foster Care program expands to adult animals with special behavioral or health needs. In 2008, more than 400 animals were placed in foster care with our volunteer caretakers.

In 2005, we begin working with pet owners to solve problems that might cause them to surrender their pets to a shelter. The admission deferment approach reduces the number of animals surrendered to shelters and enables many pet owners to keep their pets at home.

We begin taking in large numbers of animals from neighboring shelters, including the Baltimore Animal Rescue and Care Shelter (BARCS), to provide better opportunities for adoption. In 2006, we are named an American Humane Association “Best Practices Honoree” for our Transport program. Transported animals make up almost 50% of all the animals in our adoption center in 2007. 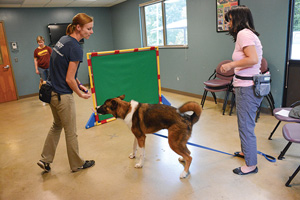 We join with other shelters to form the Baltimore Animal Welfare Alliance (BAWA), which works to improve the well-being of animals in our community. The alliance focuses on ending pet overpopulation; its ultimate goal is a community where no healthy/treatable animal is euthanized. 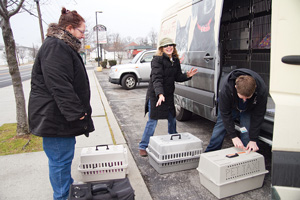 We begin publicizing a new mission. The Maryland SPCA improves the lives of pets and people in the community by fostering healthy animal-human relationships.

We no longer focus directly on the prevention of cruelty to animals. Instead, we seek to improve animal-human relationships and indirectly prevent cruelty by, accepting and adopting out pets, performing spay/neuter surgeries to reduce the unwanted pet population and offering behavior training and advice. Suspected cruelty cases are referred to the appropriate government agencies. 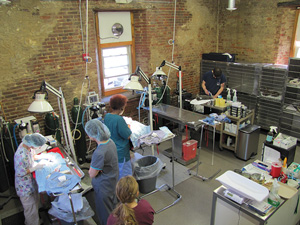 We open a freestanding, on-site, high-volume, low-cost, spay and neuter clinic in the renovated Pump House. With the new clinic, we expand our spay/neuter programs to target cats and pit bulls of low-income owners.

Voucher program starts, offering free spay surgeries to cat and dog owners with female pets who have given birth. 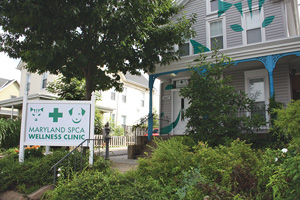 Morton Gorn Center for Animal Adoption opens, as an addition to the current shelter. 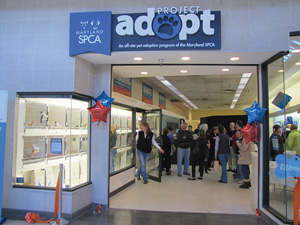 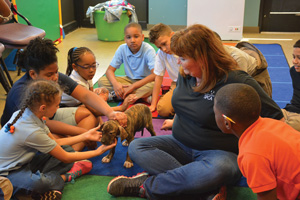 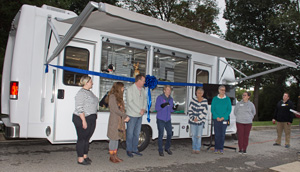 Adoption vechicle is purchased and paid for in part by a Volunteer & Foster campaign. 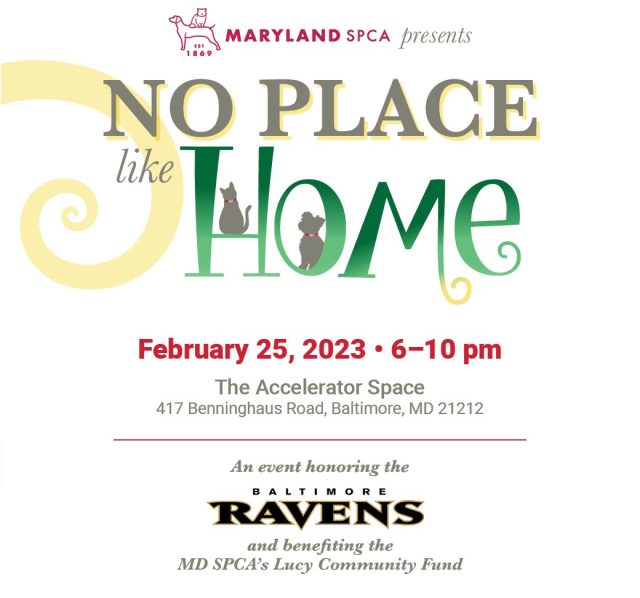 Provide a temporary home for pets who need extra time.

Join us for training classes and community events.